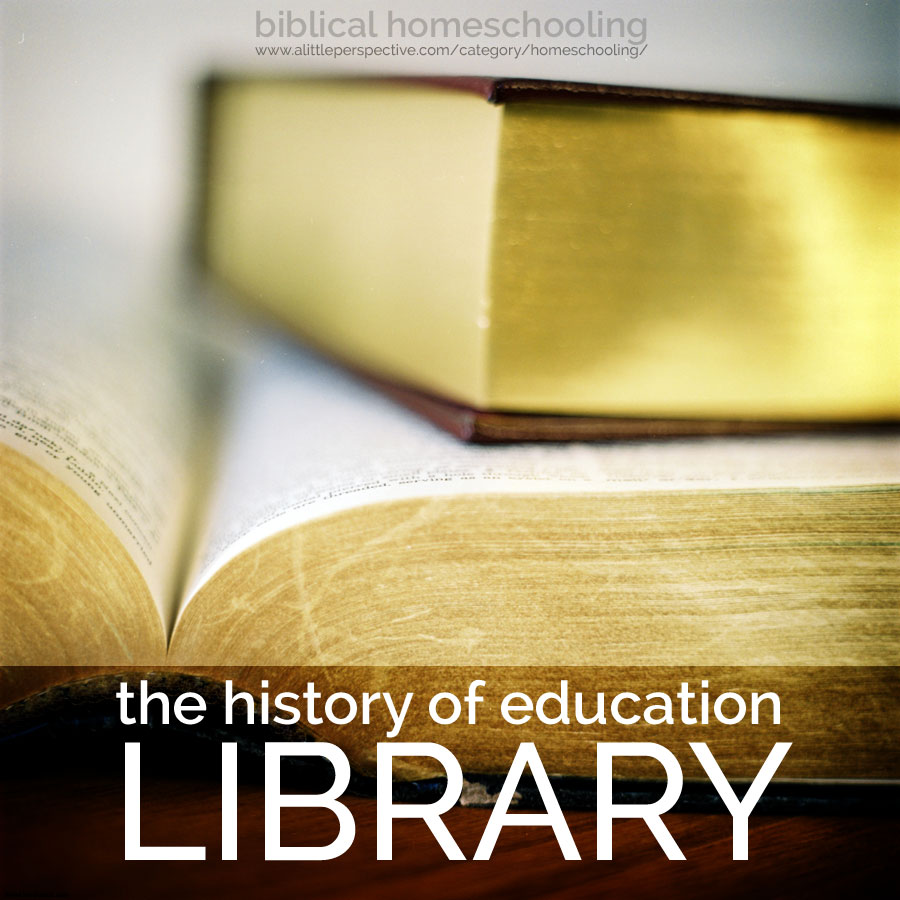 The links that follow provide greater information about the history of education in Western Civilization, both traditional (classical) and modern. These lists may not be exhaustive, although we try. We humbly welcome your suggestions as to how these pages may be improved. Please notify us of any other sites you feel should be here, or of any links that are broken. Thank you.

Classical America
This university site is full of fascinating links and source material concerning the state of education in Puritan and Colonial America, which was, of course, classical in emphasis.

Education in Colonial America
A description of American education during the colonial era by Robert Peterson, Headmaster of The Pilgrim Academy, Egg Harbor City, New Jersey.

Classical Christian Education: A Look at Some History
by Ben House, pastor of Grace Covenant Church in Texarkana, AR and the administrator of Veritas School. “Unstable times call for a return to theological foundations and historical forms [in education.]”

Dumb Certainties by Dr. George Grant (link gone, still looking)
This article looks at the history of education since the establishment of the National Education Association (the NEA), and its effect on the philosophy of public education in this country.

In Their Own Words: Progressives’ Historical Vision for the Education System
Seven quotes from the social engineers, beginning with Dewey in 1899, who have given us the modern public education system.

The Graves of Academe by Richard Mitchell
There is no question that the philosophy of education and, therefore, the goals of education have changed even in the past century. What has caused it, and what does it mean for education reform? Richard Mitchell’s look at the “nature of the beast” is insightful.

History of Education, 1911 Encyclopaedia Brittanica
A comprehensive EB article from the fabled 1911 edition which traces the development of educational philosophy and practice in Western Civilization.

The Idea of a University by John Henry Newman
John Henry Newman was one of the greatest classical and catholic scholars of the 19th centruy. “In 1854 he went to Dublin for four years as rector of the new Catholic university, and while there wrote his volume on The Idea of a University, in which he expounds with wonderful clearness of thought and beauty of language his view of the aim of education.”

Lost Tools of Learning by Dorothy Sayers
This essay, really a speech given by Dorothy Sayers at Oxford University in the 1940’s, is largely responsible for the snowballing resurgence of interest in Classical Education.

Selected Writings by Andrew Kern
Note:The website for the Foundations Academy has disappeared. Their links will become active again when, and if, their website goes back up.
Andrew Kern is the director of classical studies at Foundations Academy, an ACCS classical school in Boise, Idaho. He has several articles in the Foundations Academy Newsletter addressing the history of modern educationism: Foundations of Modern Education and The Lord of All Learing. Also at this page: “While working toward his undergraduate, Andrew wrote a series of four essays on the development and origins of classical education. We are unaware of any set of works which so thoroughly describes and develops the history and foundation of classical education.” While not all are up on the internet yet, they are “coming soon.” Keep checking this page for their arrival.

History of American Education Web Project
“This History of American Education Web Project was originally undertaken as a class assignment by members of an undergraduate Foundations of Education class. Most members of this class took it as juniors or seniors to fulfill a requirement for teacher certification…. The instructor, whose Ph.D. is in History of Education, edited the student reports, created and formatted these Web pages, and linked the reports to them…. Students in subsequent sessions of this class have continued to contribute material to the project.”

All of these links to books online, or to information concerning procuring a copy of the book, have to do with the history of education, or with the description or development of a classical education theory or philosophy, in one way or another. Some of these books are found in the bibliography of Classical Education and the Home School by Douglas Wilson, Wes Callihan, and Douglas Jones; some are e-text links that I have searched for in attempting to find some of the works listed on Wes Callihan’s Annotated Bibliography; some are online works that I have stumbled upon that have proven enlightening; and some are well-known for their elucidation of education, both ancient and modern. I expect to continue to add to this list as my own self-education progresses.

Plutarch (pseudo): On the Education of Children

Augustine: City of God, and On Christian Doctrine

Montaigne: Of the Education of Children

Williams, Nathaniel: The Curriculum of the Boston Latin Grammar School, 1712

Washington, George: Letter to the Commissioners of the District of Columbia

Mitchell, Richard: The Graves of Academe

Postman, Neil: Amusing Ourselves to Death