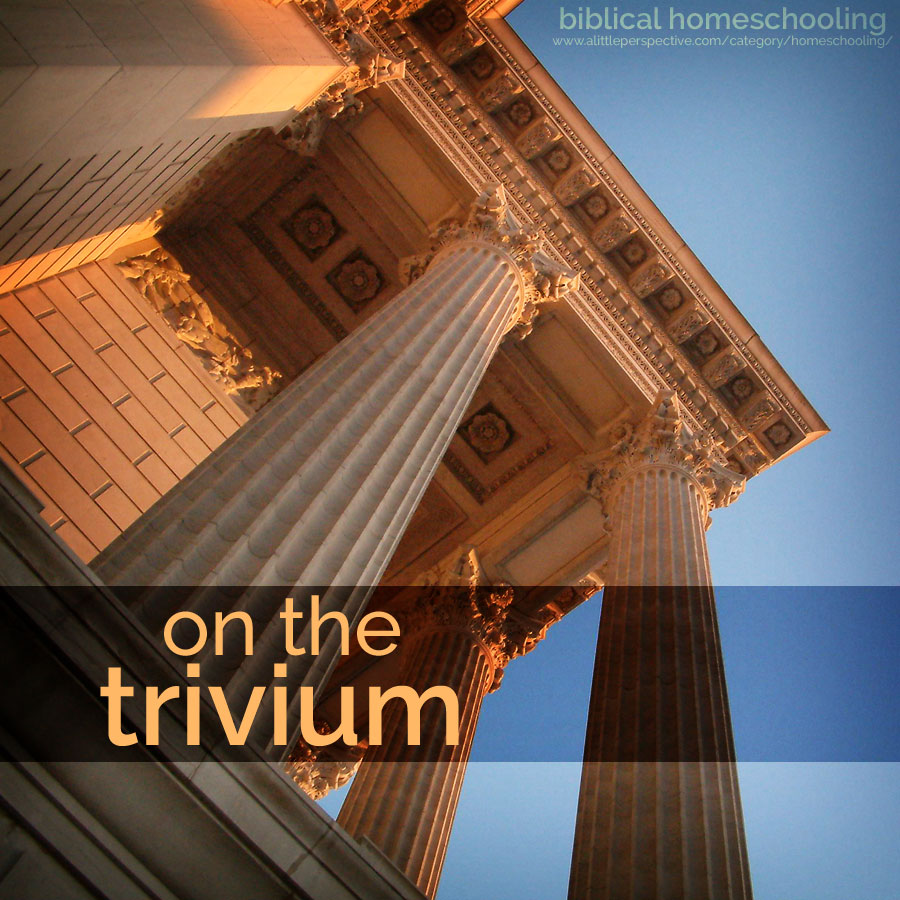 The Three Laws of Learning

The word “trivium” comes from the Latin prefix “tri” meaning “three,” and the Latin root “via”meaning “way,” or “road.” The word literally means “the three-fold way or road.” The trivium refers to the three stages, or ways, of learning that coincide with a child’s cognitive development as he matures. We should begin an in-depth look at the trivium–the three stages of learning–by reminding ourselves that the trivium is not some arbitrary theory of teaching methodology or new fad of learning philosophy. Rather, the trivium was developed by long trial and error, through the observation of the ancients in the way children learn during the whole course of their instruction from young child to young adult. They realized that time after time, they followed three stages in the learning process. They simply pointed out what was obviously there; what God had designed: that there are three stages, which they named Grammar, Dialectic,and Rhetoric; and they progress in that order. Think of Sir Isaac Newton. He didn’t invent the three laws of motion (God did that when He created the universe), but after careful observation, he defined them by stating what was already there. So it is with the trivium. We might even call the trivium the three laws of learning.

How We Learn & the Trivium

There are two ways to look at the trivium. The first has to do with the affinity that children have for thinking about things, for seeing things in one light or another depending on their stage of brain development. It is a well-known fact that when a baby is born, his nervous system isn’t fully developed yet. There is a process of myelinization of the nervous system that must occur, and this process takes years. First he is able to hold his head up, then roll over, crawl, walk, run, jump, and finally do things like ballet or basketball or synchronized swimming with style and grace. Just as a child’s physical coordination and motor skills develop and become more refined over time, following a definable progression; his cognitive coordination and thinking skills also develop and become more refined over time, following a definable progression.

Therefore a child will first embark on the stage of brain development that classicists term thegrammar stage. In this stage he has a natural affinity for storing up a tremendous amount of information on any number of things, from nursery rhymes to math facts, and recalling that information at will. He will then progress to the stage termed the dialectic, where his abilities to reason are honed and sharpened, and everything is turned into an exercise in argumentation. And lastly he will advance to the rhetoric stage, where self-discovery and expression are the paramount concerns, and where cognitive abilities come into their full flower of maturity.

The second way to look at the Trivium is just this: that anyone learning something new goes through these three stages as well. A baby learning his native language starts with vocabulary first (the grammar stage), advancing on to stringing that vocabulary together in meaningful ways (the dialectic stage), and ending with finally becoming proficient in completely expressing his thought in the common standard of language usage (the rhetoric stage.) A teenager learning to drive or an adult learning to operate a personal computer does the same thing: commit the vocabulary, the rules, the basics of the subject to memory (grammar), string the isolated parts together to make a meaningful whole (dialectic), then become proficient in the operation of the car or the computer or whatever the subject happens to be (rhetoric.)

With that under our belt, let us look at the grammar stage more completely. Simply defined, it is the learning of the body of knowledge of a subject, and most classicists would agree that this is best done by memorization. Most of us have been trained to have an aversion to rote memorization, but it is not harmful, and neither does it have to be dull. I would venture to say that no baby had to be forced to learn to talk, but rather he enjoyed the process immensely. In reality, a child begins learning the grammar of things when he is born and continues from there, but in formal education the grammar stage coincides with the elementary years. In terms of cognitive ability, children at this age automatically zero in on the concrete facts. Therefore it is fine at this stage to concentrate on the concrete and leave the analytical and the abstract out of it.

There is a big push in modern educational theory to introduce abstract concepts to elementary children, and while there is some overlap of the stages with individual children maturing in their thinking individually, for the most part they are not developmentally able to grasp abstracts at this age. Resist the pressure to have young children wrestling with underlying abstract mathematical concepts; feel free to be the only one in miles that does not emphasize self-expression to the detriment of all else in writing class. Ideally, an understanding of anything is not the goal at this age, but rather: have they memorized their math facts and demonstrated that by being able to do computations; have they memorized their phonics and spelling rules and demonstrated that by being able to read and spell correctly; and so on. The problem with attempting to teach abstracts at this age is that children do not yet have the ability to connect relationships between factors, nor do they have the ability to question and reason out the validity of what they have been told, but they have the ability to believe that what they have been told is the truth. That is the beauty of the grammar stage.

The dialectic stage is defined as learning to reason, and the body of knowledge learned in the grammar stage is the stuff learning to reason is practiced on. In the grammar stage children learned facts; in the dialectic stage children try to understand the facts they have learned, and begin to relate those facts to one another in a significant way. This stage coincides with middle or junior high school, although it may actually begin for individual children earlier than that, in 5th or 6th grade. It is in the dialectic that the emphasis in cognitive skills shifts from the concrete to the analytical. This is where children are naturally inclined to ask the question “Why?” This is where they question what they have learned in the grammar stage to see if it is in fact true. Truth holds up very well under examination, and only proves its nature by this process. While not advocating children question the things they were taught, if what they were taught is true, we need have no fear of it being questioned, even if that questioning runs to things such as the existence of God or the veracity of the Word. Therefore teaching the science of Logic is critical at this stage. It gives children the tools they need to question accurately and arrive at valid conclusions. We might be conditioned to react with shock or discipline, even, when children at this age question, argue, or want to know why. If we can understand that going through this process is the necessary step to arrive at the next one and therefore on to maturity, perhaps we can temper our response and help children learn to question and reason while maintaining an attitude of honor and respect.

The last stage is the rhetoric stage, which focuses on learning the science of communication and the art of expression. In the grammar stage children learned facts; in the dialectic stage children began to understand those facts, and in the rhetoric stage children learn to express what they now understand in the most compelling manner possible. This stage roughly coincides with high school. Cognitively speaking, this stage is where abstract thought reaches its zenith. In this stage, the unknown can be explored because the known is understood; the hypothetical can be introduced and grasped with the mind. The mental jump can be made from the natural to the spiritual, from the practical to the theoretical. Self-expression finally comes into its own in the language arts; “hard” sciences and advanced mathematics are more easily mastered; history can be applied to economics and political science; and Bible study can turn to apologetics.

The Stages & the Subjects

From this explanation of the stages of the trivium, we can see that each instructional stage corresponds to a related stage in cognitive development: the grammar stage to concrete thinking, the dialectic stage to analytical thinking, and the rhetoric stage to abstract thinking. The stages themselves also bear the name of individual subjects which are at the heart of that stage. The subject of grammar, which is the science of correct language usage, is best learned in the grammar stage; the subject of logic, which is the science of right thinking, is best learned in the dialectic stage; and the subject of rhetoric, which is the science of expression, is best learned in the rhetoric stage. Each of these subjects give our children valuable tools of learning which enables them to grasp, understand, and act on any other subject, area of study, or problem encountered in college and in adult life.

Some confusion in understanding the trivium has resulted from the names of the stages themselves sharing the names of these individual subjects. We must remember that each stage represents a distinct way of teaching and learning and thinking about each subject in the curriculum, while at the same time zeroing in on a particular field of study uniquely relevant to that stage. In discussing the trivium it is helpful to distinguish between the stages of grammar, dialectic, and rhetoric; and the subjects of grammar, logic, and rhetoric.

The Trivium in Summary

The trivium is most easily understood first by realizing that it is not some fly-by-night modern educational theory, but tried and true laws of learning. It can be looked at in two ways: as instructional stages that correspond to cognitive development, and as a natural process that is followed anytime any person of any age learns something new. As instructional stages, the trivium follows this progression: the grammar stage, emphasizing memorization of concrete facts and corresponding to the elementary grades; the dialectic stage, emphasizing understanding and analytical thinking and corresponding to the junior high grades; and the rhetoric stage, emphasizing expression and abstract thinking and corresponding to the high school grades. The stages of instruction should not be confused with the specific core subjects of grammar, logic, and rhetoric; which are best taught during their corresponding stage and provide the tools of learning which are the goal of the trivium. Comprehending these basics about the trivium will go far in helping to unravel the mystery of how the trivium ought to be applied to each subject in each stage.