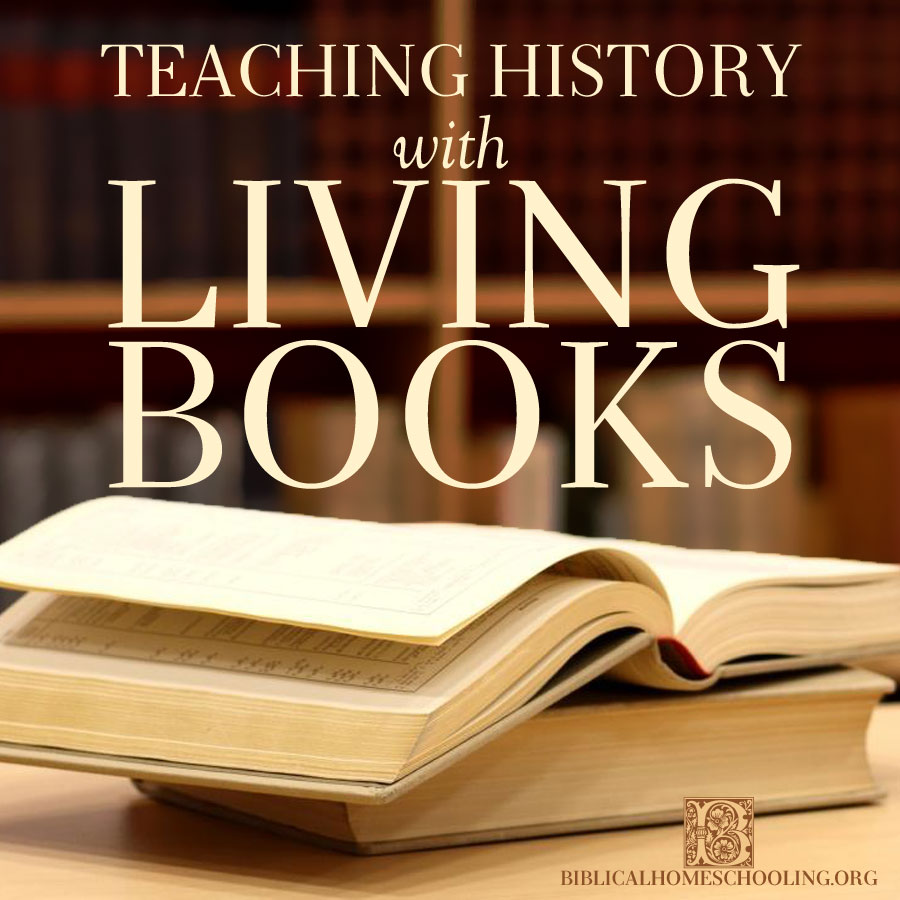 History is His Story, the story of the Lord’s dealings with mankind, both individually and collectively. His Story is full of drama, adventure, excitement, wisdom, tenderness, grief, and even humor. If we limit the teaching of history to only the bare bones facts, then we and our children are missing so much of the wealth that is inherent in His Story. Let us therefore teach the facts in such a way as to make history come alive; tell the “story” in “History” to give children the rich meaning that can be found in our history. This can be accomplished in several ways: by teaching history chronologically, in the order in which it happened; by incorporating narratives and literature whenever possible into the curriculum to bring history to life; and through the use of timelines and games to make memorization fun.

The Lord God who dwells outside of time and space nevertheless is working out His plan of salvation among men, within time and space. It is a chronological plan, based on real historical events. Each historical event in His plan is dependent on the one preceding it. There would be no Fall if there was no Creation. If there had been no Fall, then what need would there be for a Judgment by Flood on the sin of mankind? A real nation in history was set apart by God to preserve the line of the Messiah, so real prophecies given in history could be fulfilled in their time. In order for that real nation to not be corrupted in its way as the people before the Flood were, a Law was given to restrain sin. In order to understand something that happened later in history, such as the birth, death and resurrection of Jesus Christ, we must know what happened earlier in history, such as the Fall of Adam and the Flood of Noah. God’s plan only makes sense when it is understood in its chronological context. Since God’s plan is completely interwoven with the history of nations, it makes sense to study history, and God’s plan, chronologically.

I will share with you a few of the advantages I have noticed in my own children from teaching history this way. The first has to do with the continuity and flow of history. When we have begun at the beginning and worked our way from there, the children have had a foundation to build upon. The society and customs and prevalent thought of the period currently under study is linked in their minds to the period previously studied, and those links provide a framework to build new information upon as well as a pathway to progress upon. History, for them, is not merely a series of disjointed facts and places and persons to be remembered, but a series of relationships that make sense.

The final advantage that I have noticed (and I am sure there are more) is the knowledge that the children have that history is truly His Story – the story of the Lord’s dealings with mankind, universally and individually. They see a Master plan as events and epochs unfold before them. They see promises made in the beginning of time brought to fruition, they see the hand of the Lord guiding His creation. The fear of the Lord impresses them on one hand as they witness His judgment and nations that reap the consequences of their choices, and the lovingkindness of the Lord impresses them on the other hand as they see the Almighty again and again choose to stretch out His hand to accomplish His good purpose. The saturation in His Story frees them from our overbalanced American culture and worldview to give them eyes that see beyond our borders, beyond our media’s presentation of life and the world, beyond their years.*

History through Biography and Literature

Although there may be excellent textbooks out there for teaching history, I prefer using narrative histories and literature instead of textbooks whenever possible. A narrative history is merely a history that reads like a story, but the story that is being related is the true history and not just a fiction. The reasons I prefer these are first of all, interest: children are more interested and fascinated with what they are learning when learning it out of real, “living” books rather than textbooks. Textbooks by their nature are stripped down to the bare bones facts, which, let’s face it, are boring, boring, boring. Living books, literature, makes historical figures come alive, giving them depth and character and thoughts and feelings and struggles and joys in ways that textbooks cannot possibly do. We see historical figures as real people we can relate to, facing many of the same kinds of life situations we have to face. Literature paints us a picture of a time and place, of customs and society and manners. With literature we get local color, enlightening background, and the big picture. All of this translates into greater interest for our children in what they are learning.

Interest is important because it leads to the next advantage of using literature to teach history: retention. Many of us can recall our own history lessons in school and remember struggling over history texts and tests, but what actual facts do we remember from all the hours spent with texts and classroom lectures? I would bet not a high percentage for the time involved. And yet we recall with fondness a treasured book such as Little House on the Prairie by Laura Ingalls Wilder, and ingrained in our memories are tidbits of American history and a mental picture of vast prairies, along with familiarity of a way of life since gone by. While reading Little House on the Prairie, we learned naturally and effortlessly with interest and pleasure many of the same facts that we struggled to learn from the texts, and with a much higher percentage of retention of those facts.

A third advantage to using living books to teach history that is often difficult if not impossible for textbooks to emulate, is understanding. An understanding is planted which begins to grow over time of the cause and effect nature of history, how an event can snowball and lead to other events, how choices an individual makes for good or ill can set mankind on a path from which there is no turning back. Living books by their very nature asks questions of us that keep us reading to find the answers. Very often we ask why someone chose this path or that one, and we strive to understand the choice. We begin to see not only the events themselves, but the why behind the events. We begin to see that history is not just a separate subject in its separate compartment, but that history has had an effect on science, and math, and politics, and economics, and geography, and grammar (my children always loved my explanation of the soft c’s and g’s we have in English – it led to the story of the Norman invasion of England in 1066 and the subsequent blending of the French and English cultures on English soil; the gradual picking up of French pronunciations in many of our words.) And we also begin to see that politics and economics and science and math and grammar and geography have had their effect on history as well.

There are many ways to integrate literature in the study of history. In our homeschool, we use a storybook as a basis: our favorites are H. A. Guerber’s Story of series. I usually read a few pages outloud to all the children of all the varying grades together. Then after a bit of discussion, they settle down to read their own books silently. Several years ago we learned about the French and Indian War in American history, among other things. I read aloud to them from Struggle for a Continent by Albert Marrin, and each child had their own book to read silently. My 4th grader enjoyed Kateri Tekakwitha: Mohawk Maid by Evelyn Brown, while my 5th grader read Roger’s Rangers and the French and Indian War by Bradford Smith, as my 8th grader read Calico Captive by Elizabeth George Speare. When they finished their books, they did some writing on what they read (or narration when they were younger), or possibly a project inspired by the book, and then when the writing or narration or project was completed, they went on to another book. All the while our daily outloud reading continued until we were finished with that point of history and ready to move on to the next time period.*

The facts of history are fairly straightforward. The most basic is knowing the names of the persons, places and events that have shaped Western Civilization; for example, the event is the Giving of the Ten Commandments, the person is Moses and God, and the place is Mount Sinai in the Sinai Peninsula. As these facts are learned in the context of the literature (in this case, Exodus from the Holy Bible) not only will they have these facts at their command, but they will also have the mental picture in their mind of the fire and smoke, the terror of the Israelites, the majesty of God surrounding their deliverance from Egypt and their establishment as a nation, and so on. In other words, they will have a place in their minds for the facts to stick.

The next set of facts are not so easily discernable, but important to learn none the less. These concern the society, customs, government, religion, costumes, and food of a nation as they are encountered by Western Civilization. When they look at a picture of an Egyptian tomb painting, they should recognize the style of art as being Egyptian, as well as the costumes of those depicted. The picture should bring up a memory of a society ruled by an absolute ruler, the Pharaoh, who was worshiped as a god: the fact is a system of government. Thoughts of the Egyptian gods and how they were judged by God should also be in there, as well as a picture of a strict class society which used slaves and built great monuments to itself. While these pictures are hard to embed using a strict memorize the fact from the textbook approach, they implant themselves firmly and naturally when using narratives and living books to teach history.

The historical facts should be memorized. Many of them will come naturally to a child steeped in history through the excitement of hearing the literature. Any of the memorization games listed in the Overview article will also work well. In addition, in our homeschool we have ingrained the facts more thoroughly by using historical material for copying, dictation, and narration; staging dress up History days; following the unfolding historical events on a map traced and colored, and labeled with historical place names, for just that occasion; watching quality videos and historical movies when available; and playing Aristoplay history games. (The great Aristoplay history games are out of print. Try searching for them on eBay.)

There is so much more that can be done to bring history to life while still learning the facts. Enjoy the wonder of discovering His Story with your children, by teaching history chronologically, by using literature and biography, and by making memorizing the facts of history fun. 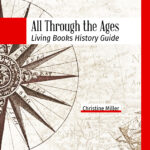 *Much of the material from this article is taken from the Introduction of All Through the Ages by Christine Miller. All Through the Ages is a living books history guide which lists the histories, biographies, historical fiction, non-fiction, and literature which can be used by homeschooling parents to teach history chronologically using living books. The guide also includes living books to teach geographic awareness and the history of science, mathematics, the arts, and the great discussion of Western Civilization and the Christian tradition.