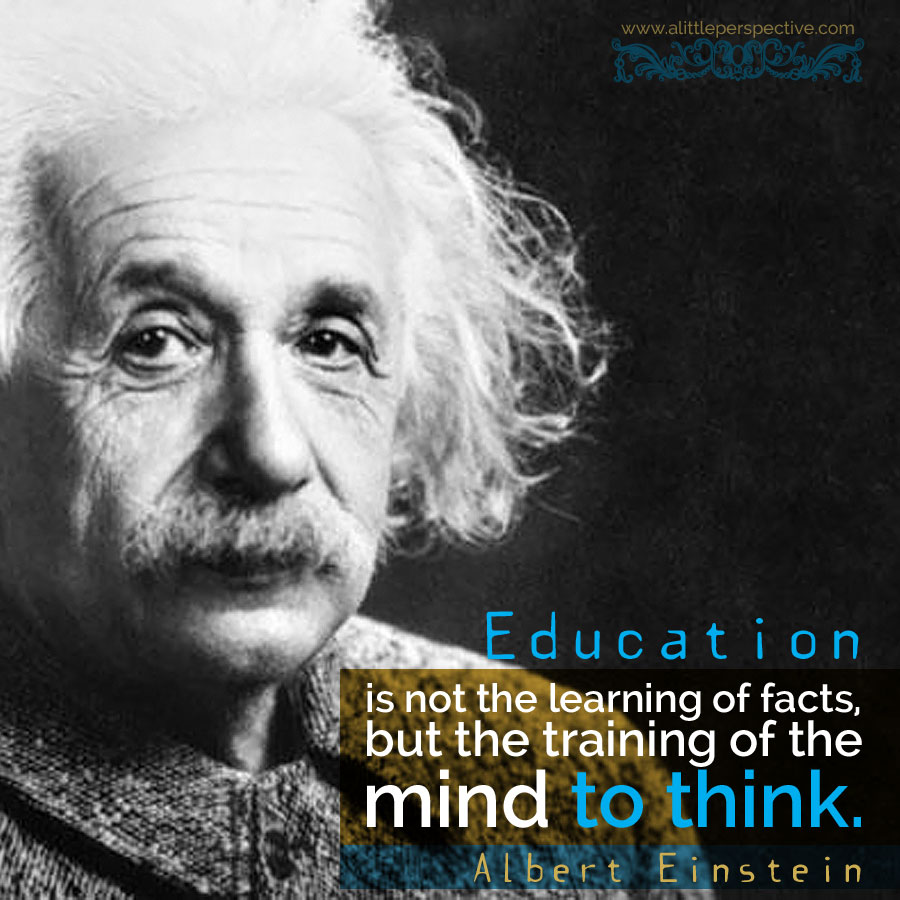 The word “educate” itself gives us a clue to its purpose. It is from the Latin e “out” + ducere “to lead.” To lead out. We are born in a certain state, and the process of education ought to lead us out of that state. But Einstein is right, education ought to be more than just the learning of facts or the progression from unknowing to knowing. What do we mean by “learning to think?”

“Most of those little gaucheries and solecisms [of incorrect grammar] that make us think that we ought to teach more grammar are only the habits of a mind in a certain condition, a condition to whose cure all of us have supposedly chosen to devote our lives.

“I know of no specific name for the condition I have in mind, and I find it hard to describe. Although it is a kind of thoughtlessness, or unknowing, it is not truly what we usually mean by ignorance–the simple lack of information. Nor is it dullness of mind, or stupidity, whatever we might mean by that. It is that condition in which the mind takes but little, or takes but rarely, the grasp of itself. Although it isn’t necessarily caused, or perpetuated by a lack of reading, or cured, either, by a glut of reading, it is nevertheless the condition to which we seem vaguely to point when we sit around and complain that our students seem never to have read anything.

“While I would not want to make a habit of it, I will for now call that condition ‘inducation,’ the state of being led into something, rather than out of it, as ‘education’ suggests. But even that idea is not quite enough, for the condition I have in mind is not accurately described as one into which we are led, but one in which we are left, and out of which we might be led. In its purest form, it is the condition in which the mind operates like an organ of the senses, thinking what it must think in response to the suggestions of its environment, as the ear hears whatever it can hear and the open eye must see whatever lies before it.

“As Holmes often remarked to Watson, it is not at all uncommon for the eye to see without noticing, and when the mind works like an organ of the senses, it is to be expected that it will do the same, which can perhaps be described as thinking without thinking about, without considering, reflecting, comparing, weighing, or judging. It is the condition in which the mind serves as a registry, a perpetual catalog of whatever presents itself. That condition is not only one in which we are born, but one into which we fall continually, and into which, it must be admitted, we had better fall in the ordinary course of daily life, lest we find ourselves walking into closed doors and driving our cars on the other side of the road.

“Consider now the opposite condition, the one in which the mind, still the hapless receiver of the world about it, can nevertheless withdraw far enough so that it can, and will, consider, reflect, compare, weigh, and judge–comment, as it were, on the items in its register.”

That is what is meant by thinking: a mind given its power, able to withdraw from its senses and the information it has received, and consider it. That is a necessary goal, but one often discouraged in mass education systems. Thinkers live or seek to live in a state of freedom and self- determination, and are hard to control.

But even that is not far enough. An individual has not been truly educated until they have learned to consider, reflect, weigh, and judge rightly. When a desire has been ignited for the pursuit of truth, and the tools internalized to sift and separate truth from untruth – then a child has been given the power of their mind, and has received an education.

continued in
the heart which loves virture
the heart of learning

One thought on “what is education?”