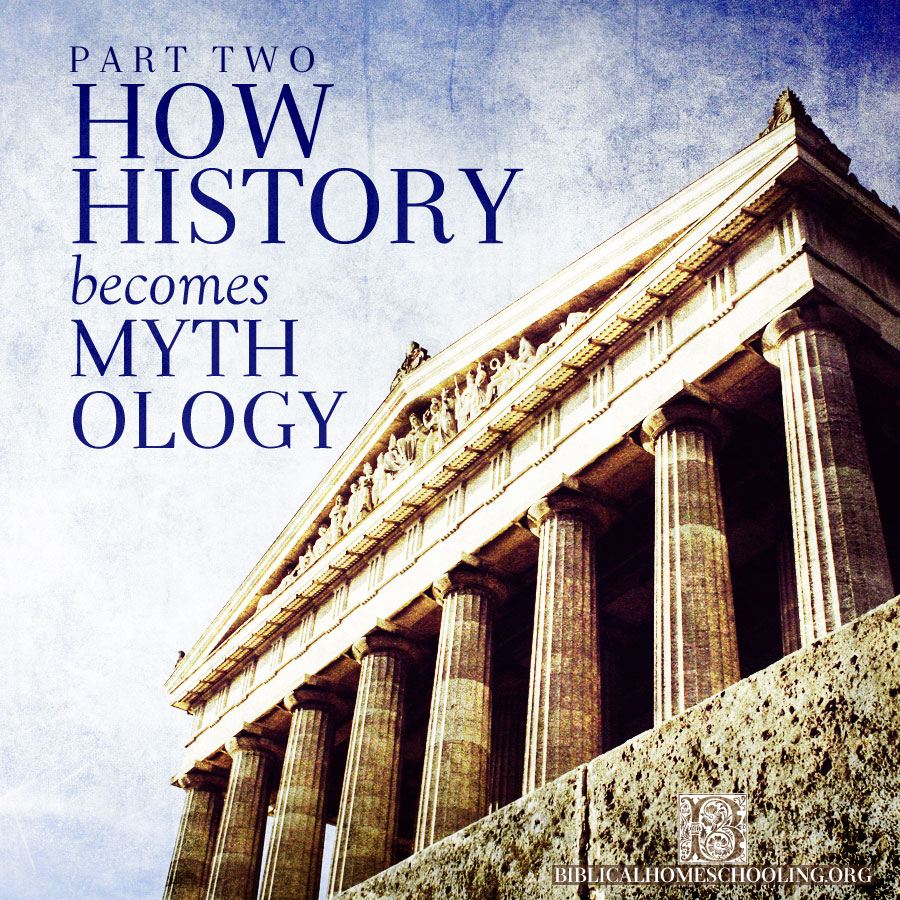 When teaching Greek mythology, make the connections from the mythology to the true history which inspired the myths, to develop the biblical worldview in children concerning pagan mythologies. The story of Deucalion is the Greeks’ confused remembering of their ancestor Noah through his son Japtheth (Greek “Iapetos”, Roman “Jupiter”) and his grandson Javan (Greek “Ion”, from whence “Ionian” is derived).

The separation of Father Sky (Roman “Uranus”, Sumerian “An”) from Mother Earth (Roman “Gaia”, Sumerian “Ki”) mirrors many ancient cultures who have heaven- earth separation myths, from their single place of origin at Babel, based on a perversion of Genesis 1:6-7. In Greek mythology, the Titans are evil giants, the result of the union of Sky and Earth. In ancient history, the Annunaki (Sumerian, Hebrew “Anakim”) are evil giants, the children of Anki (Sumerian An + Ki, Hebrew “Anak”).

The Pandora’s Box myth contains clear elements of the true history of the entrance of sin, death, and everything evil into a perfect world: the first woman receives a gift which she is not to open (the first woman has access to fruit of which she is not to eat), and the result of her disobedience allows evil to enter the world. The Pandora’s Box myth even has Hope remaining in the box, which the woman especially cherishes, mirroring the promise of the woman’s Seed in Genesis 3:15.

Another manifestation of the promised hero based in Genesis 3:15 in Greek mythology is found in Homer: Achilles, the invincible warrior who could only be wounded in the heel. The Persephone myth is a variation of the Babylonian myth of Ishtar and Tammuz, which again shows the root of Greek paganism to be the historical rebellion at Babel.

One thought on “HOW HISTORY BECOMES MYTHOLOGY, PART TWO”